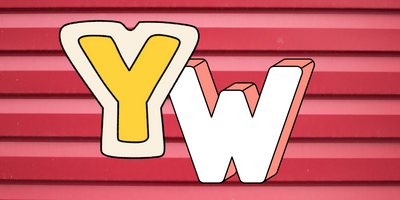 What are the Y and W symbols doing at the top of the Color Vowel® Chart? They're here to quietly remind us and our learners about vowel-to-vowel linking, both within words and between words.

English speakers automatically insert these special sounds both between words and within words:

“Though you can’t tell from the spelling, English is a language that hates putting two vowel sounds together.”

Take, for example, the word variety. Our eyes tell us that the <i> and the <e> in variety represent two vowel sounds in a row.

Our ears, however, know the real story: that the second and third syllables in variety are linked with a /y/: variYety . You can think of these as 'invisible sounds' — sounds that you can hear but don’t see indicated in the spelling of the word.

Why on earth do we have these invisible sounds? Barr explains: The so-called tense vowels of English (color vowels GREEN, GRAY, BLUE, and ROSE) all are really diphthongs rather than steady-state vowels (at least in most dialects, excepting, for example, the Minnesota/Wisconsin “o”).  This is an automatic (subconscious) rule, so most native English speakers don’t realize they turn these vowels into diphthongs.  But the movement is easiest to hear as linking between two words, when the diphthong ends the first word and the next word begins with a vowel.

To teach vowel-to-vowel linking using The Color Vowel® Chart, stand to the right side of the chart and use your hand to illustrate the dynamic movement of each sound. In this way, your hand will mimic the actual movement of the tongue (for /y/) or lips (for /w/).

Demonstrating the phrase “see it,” point to GREEN while saying “see,” then move up to the /y/ as you link to “it,” swiftly moving your hand down to SILVER.

When English learner speech sounds ‘choppy’, it is often because the learner isn't linking enough.  Instead, they may be inserting a glottal stop (represented by “?” in the examples below):

Glottal stops are exactly 'wrong,' but they have their own purpose. Native speakers will subconsciously use glottal stops either to clarify/emphasize the message or to indicate strong emotion such as frustration or anger.

Other learners may be omitting one of the two vowel sounds, so that one ‘swallows up’ the other (where “see it” becomes “seet”), or otherwise distorting the rhythm that English listeners expect, making them hard to understand.

Some teachers find it difficult, at first, to notice and teach vowel-to-vowel linking, so let’s practice:

Dr. Robin Barr is Linguist In Residence at American University in Washington D.C.  She uses The Color Vowel Chart to teach phonetics and pronunciation teaching methods.

Karen Taylor is co-author of The Color Vowel Chart.  She is constantly aware of (and delighted by) her own use of /y/ and /w/ for vowel-to-vowel linking.